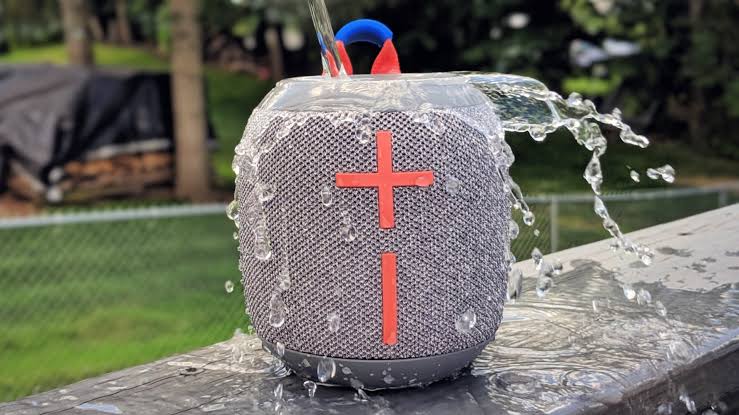 Portable bluetooth speakers have become the new boombox from the 80s/90s and cracked into the market and created huge demand for consumers. Ultimate Ears is one of the main leaders in this segment with its Boom range. The latest Wonderboom 2 offers extra benefits over the outgoing Wonderboom.

The Wonderboom 2 stands 93mm tall and 93mm wide, weighing in at 426 grams. This size is perfect for portability as it fits into any backpack with ease and can easily be carried around on the go. It comes in a whole gram lighter than the outgoing model and 1cm shorter, meaning slightly more portable.

The wonderboom 2 fits into the palm of the hand perfectly, with its snug form factor it’s easy to carry around and fits in anywhere it is placed around the house, backyard or on the go.

The Wonderboom 2 has two 40mm loudspeaker drivers and two 46.1mm by 65.2mm passive radiators (these are similar to loudspeakers but are not connected electrically, instead they are tuned to resonate at different bass frequencies to make the bass stronger).

UE has also given the Wonderboom 2 13 hours of battery life. This is an increase from 10 hours on the outgoing model, and we found this to be accurate and some times even better at a stead 50-70% volume level.

This speaker gets an IP67 waterproof rating meaning it is completely dust proof and able to be dunked 1 metre deep into a pool for up to half an hour. Which is a bump up from the previous models IPX7. It can also be dropped from 1.5 metres.

There are multiple colour options so far, including black, grey, red, blue and pink, with more likely to come in future.

The loop on top holds the device well and is a great little addition to the speaker, made up of part fabric and part rubber.

On the device itself, there is the usual UE speaker + and – on the front to control the volume. Then on top, there is a bluetooth pairing button, an on/off button and the function button. The function button acts as a play/pause and double tap next song button.

At the bottom is a micro USB port to charge the speaker with the bright cable that can charge the speaker in 2.6 hours according to UE. Unfortunately, no USB C. The speaker flashes as it is charging and then goes solid once it’s ready to go. We found that 2.5 hours was the average charge time with 5 watts of power.

For its size, this thing can get incredibly loud, clean and has a decent thump to it. It will be plenty loud for almost all that you would need it for.

It might struggle outdoors if you have many people around, but it will put out consistently loud sound for people within several metres. We tested this in a few different environments and found it struggle outdoors in a backyard and had to leave it on max. But again, we know the size limitations of this device.

It has an “outdoor boost” button on the bottom which was a brilliant add-on as it makes the sound that extra bit louder when you need it, to get that extra punch.

Indoors, it does well with its 360 degree sound. It is crisp enough and provides a good compromise between sound and form factor.

The high frequencies are actually astonishing. The mids and treble are fantastic with vocals sounding crisp as ever. The frequency range is stated as 80 hz to 20,000 hz. UE has developed this device so that the mid-bass boost from the passive radiator can restore the perception of strong bass which works very well.

The Wonderboom 2 can also work whilst charging. It auto switches off after 15 minutes which is great if you forget to turn the Wonderboom off.

It is now priced at $99 locally, meaning it is one of the best priced systems with great sound quality, is portable and even more durable now than ever.